As our numbers continue to grow each season we find our ability to cater for them all is starting to diminish. While we have a dedicated coaching staff we could have entered at least 4 other teams across various age groups this season but did not have enough coaches / volunteers to commit for the season. We are looking for extra coaches/ managers/ volunteers to join us for next season. Without additional coaches, we might not be able to guarantee places for some children and gave to close membership early so denying young players the chance to enjoy our sport.

If you are interested in coming on board, we will support you in every way we can, so please feel free to contact us by email to birrtownfootballclub@gmail.com

The call to boost volunteer numbers at Grassroots clubs and leagues has been made with the launch of a new campaign – Give A Little, Get A Lot.

The impact that volunteers have in Irish football cannot be underestimated and the Football Association of Ireland has highlighted that in the 2022-2025 FAI Strategy with Grassroots football being at the heart of the game as one of its key pillars. Now, this campaign aims to support that objective by encouraging more people to get involved at their local club and league level.

Led by a TV ad that will run across all major stations and supported on digital media, this volunteer campaign shines a spotlight on the vital contributions that volunteers make to the game and how anybody can get involved.

Of course every club and League needs volunteers and to lean on the sense of commitment of helping out and, through research conducted in association with creative agency Fifty-Three Six, two key findings emerged that helped to shape this campaign:

1. Volunteering is not just about giving back. It is incredibly fulfilling, and volunteers get so much from it on a personal level.

2. Volunteers don’t have to give up too much of their time to have an impact. There are plenty of ways to help out that don't require being in a club all the time.

This brought us to an overall campaign message of: Give A Little, Get A Lot.

FAI Marketing & Communications Director Louise Cassidy said: “At the FAI, we understand that volunteers are the heartbeat of a club and the people who ultimately make the club tick. This is why we are launching a nationwide TV and digital media campaign to encourage more people to volunteer at their local football club.

“To build a campaign that would resonate with people, we interviewed people already involved in Grassroots Football across the country, at varying levels, to understand the benefits and any barriers to volunteering. Now this campaign is live, we are excited by the impact that it will hopefully have on Irish football.”

FAI CEO Jonathan Hill welcomed the launch of the campaign by saying: “There is a strong tradition of volunteering in football in Ireland and this campaign will help add to that by showing people that there is a place and a role for them at their local club or league to make a positive difference.

“We are already working collaboratively with affiliates, leagues and clubs but we want to further strengthen that connection to help attract and retain volunteers, be it generally helping out, or as a coach or administrator because they have as crucial a role in our game as much as players, referees and sponsors do.

“We have made a commitment in the 2022-2025 FAI Strategy to raise standards in Grassroots Football and we cannot do that without the involvement of dedicated volunteers.”

FAI Grassroots Director Ger McDermott said: “Volunteers are the lifeblood within our game and our aim with this campaign is showcase the crucial role that our volunteers play and to ultimately increase our volunteer base. Football is growing across the country and volunteers have important roles in ensuring the future success of Irish football.

“We have dedicated Development Officers and key staff members doing fantastic work in every community around the country to support clubs and leagues, and they too need the help of volunteers to ensure that our game is organised, fair and fun. There are so many different roles that volunteers can take up and the purpose of this campaign is to highlight that and ensure that our volunteers are fully supported and can enjoy being involved.” 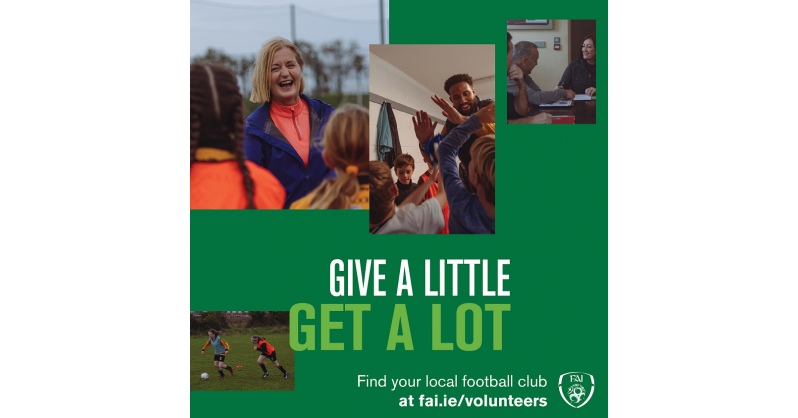